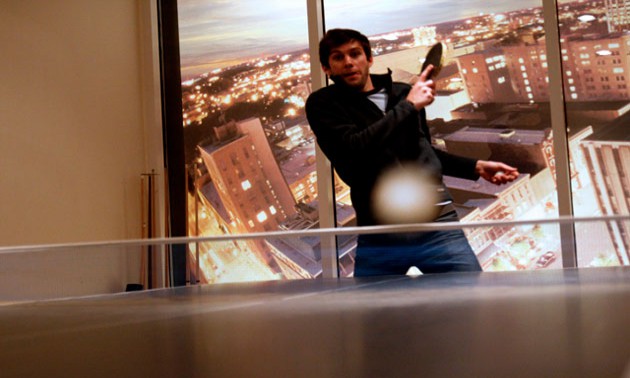 For the past few months at the Fragment office, right around lunchtime after everyone has gobbled up a few toasty hot dogs, the competition gets as heated as the George Foreman those beefy franks were cooked on. I'm talking about Table Tennis everybody!

The game that has stolen Fragment's lunch time and split the room in half? Developer and project manager vs. owner and designer or more respectably known as the teams Total Domination and Masta Pinga. We have been so hooked on the sport that our awesome boss surprised us with some professional paddles with some new sticky rubber for getting that wicked spin.

Recently, I found an article in the September issue of Muscle and Body magazine that got me even more excited about playing table tennis. The article mentions some of the best exercises to pump up your brain power and lists table tennis as a great way to a quicker mind!

"Exercise that requires coordination activates the cerebellum, which is located at the back of the brain and enhances thinking, cognitive flexibility and processing speed."

Table tennis is both an aerobic and mental exercise. Just 10 minutes of game play increases brain activity in the prefrontal cortex and cerebellum which are the parts of the brain responsible for planning, focus, personality expression, decision making and motor control. We play a lot of doubles which requires team camaraderie, communication, and strategy. Table tennis is a great opportunity to get co-workers to step away from their computer screen, relieve some stress, boost creativity and get some circulation going. After all, happy and healthy employees make for productive employees.

If you stopped by our office on any day, you'd know we're not shy about our entertainment. This makes Fragment such a unique place to work and it has only made our team stronger and our cooperation better. If there's any tension between teammates or stressing over projects, we like to lighten the mood with a little competition. If we're not on the tennis table, there's always the classic nerf war which involves some surprisingly vicious, finger-launching darts that seem to throw the office into a battle zone every time one screams across someone's monitor. For those who prefer a more relaxing stress reducer, look no further than the two giant bean bag chairs. Seriously, I can say from personal experience that those chairs are the closest you will ever come to floating on clouds. (Yup, that's right. I've floated on clouds before.) Call it our office philosophy or just plain fun, we think it allows for plenty of team building opportunities.

I could go on about the benefits of table tennis or encouraging any type physical activity in your office but you get the point. So, if anyone feels up to challenging Fragment's ping-teams to a game, I say bring it on and bring the best you got... you know where to find us.